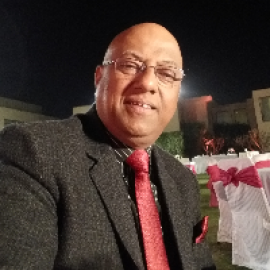 Educated at the Springdales School, the author graduated from St. Stephen's College with Honours in History. He completed his post-graduate studies at the Centre for Historical Studies, JNU, with a doctorate in modern Indian history. A former UGC and ICHR Fellow, he was Nehru Fellow at the Centre for Contemporary Studies, Nehru Memorial Museum and Library (NMML), between 2001 and 2005. In 2005-09 he taught history at the Motilal Nehru College (E), DU. He was appointed Associate Professor at the History Department DU in October, 2009 where he teaches post graduate and research students Indian and European History. He was the Indian Council for Cultural Relations (ICCR) Visiting Professor at the University of Vienna in 2014-15. He was also a Visiting Fellow to the History Department, North Bengal University, Siliguri, in November, 2015. In September 2017 he was the UGC Centre for Advanced Studies (CAS) Visiting Professor at the History Department Aligarh Muslim University. He presented a paper on Indian military history in late colonial India at the ‘Meeting of the Minds’ symposium, Brighton, UK in May, 2016. He is an Associate Editor of the online journal inclusive.org published by the Kolkata Centre for Social Sciences (KCSS) and Associate Editor of the War and Society Series published by the Helion Books, UK in collaboration with Primus Books, India. He has the following books to his credit The British Raj and its Indian Armed Forces, 1857 - 1939 (Oxford University Press, 2002) British Military Policy in India 1900-1945: colonial constraints and declining power(Manohar, 2005)Class, power and consciousness in Indian cinema and television was (Primus Books, 2009). Issues in twentieth century world history (Hindi Madhayam Karyanvaya Nideshalaya(2012, revised 2013) The First Line of Defence: Glorious 50 Years of the Border Security Force, BSF, (Shipra Publications, 2015). Hope and Despair: Mutiny, Rebellion and Death in India, 1946(Primus Books, 2017). In 2015 he wrote the Introduction to the English translation of Govind Pansare’s acclaimed Who Was Shivaji (LeftWord Books). Since 1987, when he was an M.Phil student, he has published scores of research papers, articles and reviews in reputed peer reviewed academic journals. In 2017 he completed 25 years of publishing papers in the Economic and Political Weekly (EPW). He contributes papers to the Forward Press regularly.Three short stories ‘Piyano’, ‘Cellphone’ and ‘Baba nahin laute’ have been published in the Jansatta and the Hindi literary and political journal Kathan in the past few years. The fourth ‘Do gadde methi’ appeared in the January 2016 issue of Kathadesh. His blogpastandpresentonline.wordpress.com (माज़ी और हाल)has a large following. He also writes Urdu poetry.